In a criminal career that spanned more than three decades, reputed Mob hitman Frank “The German” Schweihs had encounters with dozens, if not hundreds, of law enforcement people. However, when it came time to sentence Schweihs on a Federal extortion conviction, only CCPA Presodent John J Flood took the stand to graphically describe how he had single-handedly prevented Schweihs and an accomplice from carrying out a Mob murder. 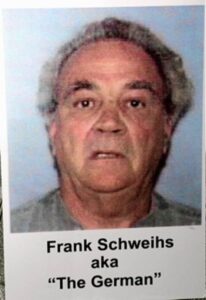 And in the process, Flood told U.S. District Court Judge Ann B. Williams, his own life was jeopardized as Schweihs’ escaping partner tried to run Flood down with his speeding car.

In fact, Schweihs was described as “one of the most violent people ever to come before this court,” by the Federal prosecutor who pressed the extortion charge before Judge Williams.

The Flood testimony dealt with an incident that took place in the western suburb of Schiller Park.. At that time Flood,  a Sergeant with the Cook County Sheriff’s Police, spotted Schweihs lurking in the dark outside the Cross Roads Motel on Mannheim Road near O’Hare Airport.

Flood told the crowded courtroom how, at the same time he spotted Schweihs sneaking around the corner of the building, he saw a car parked nearby with a man and a woman in the front seat. Flood testified that he sensed that the couple in the car were about to become victims of some violent act. At the same time, Flood told how he saw a second car parked a few car-lengths away – with a man in the driver’s seat slouched down behind the steering wheel in an apparent attempt to hide from view.

In the couple of seconds that it took to observe this crime-about-to-happen, Sgt.Flood called for backup support, wheeled his patrol car into the motel driveway, and jumped from his car, confronting Schweihs. In the brief exchange that followed, Flood ordered Schweihs to produce some identification and, at the same time, gestured to the man in the parked car to get out and come forward.

Schweihs, instead of reaching for his ID, challenged Flood with a couple of choice epithets and took a swing at the Sheriff’s Police Officer. Meanwhile, the man in the car, by then believed to be Mob figure Joey Lombardo, fired up the engine and roared the vehicle directly at Flood in an obvious attempt to run him down. In one brief, athletic move, Flood lunged at Schweihs, knocking him to the pavement while, at the same time, dodging the onrushing car that sped past, escaping out onto Mannheim Road.

The getaway car was never found and, because Schweihs would not implicate his partner, Lombardo was never directly linked to the apparent assassination attempt.

The intended victim, Richard W. Hauff, was subsequently identified as a part owner of the Cross Roads Motel and a man with longtime ties to organized crime. Although Hauff was well-known to several police agencies and was the subject of an extensive file in Chicago Crime Commission archives, he nevertheless personally thanked Flood for saving his life.

Meanwhile, Back In Federal Court…

The testimony that John Flood gave about Frank Schweihs was made directly and without embellishment. In matter-of-fact tones, Flood responded to the questions of prosecutor William Knight. He described how he first spotted Schweihs creeping toward the intended victim’s car, he described the actual bust, and he told how later, at the Sheriff’s Police lockup in Niles, Schweihs became violent and had to be restrained.

The audience of court personnel and courthouse buffs paid close and careful attention to details of the intriguing, highly publicized organized crime incident.

Then, Defense Attorney Alan Ackerman tried to shake Flood’s testimony and the room took on the mood of a comedy club, with Ackerman coming off as the butt of the joke. Although Ackerman has been a Chicago-area Mob lawyer for more than two decades, he affects a Western-style of dress, replete with cowboy boots, blue jeans and Stetson hat.

Flood, by contrast, sat erectly in the witness chair wearing a blue business suit and tie. Ackerman, as if he were trying to corral a loose calf, ranged over the courtroom from the defense table to the jury box to within three or four feet of Flood to the rows of spectators and back again. All the while, Flood answered the Mob Lawyer’s questions in a succinct and professional manner, but did not look directly at Ackerman.

After several minutes of being treated as if he wasn’t there, Ackerman lost his cool and challenged Flood to look at him directly. He charged up to the witness box and put his face directly in Flood’s line of sight, but Flood turned his head.

Ackerman demanded that Flood look directly at him. He challenged Flood on the grounds that he had looked at the prosecutor, so why not the defense? He pouted. He snarled. He appealed to Judge Williams, and still Flood would not look directly at the lawyer.

Meanwhile, a reporter was seen to smile. A spectator began to chuckle. A court clerk suppressed a laugh. And, the more Ackerman tried to get Flood to look directly at him – without success – the more the court began to be filled with laughter. Eventually, Judge Williams directed Ackerman to confine his line of questioning to the testimony at hand, and as the last snickers and giggles diminished, the room quieted down.

Ackerman made a few more feeble attempts to shake Flood’s testimony, then began challenging the entire pre-sentencing hearing on procedural points. But quite clearly, to those court buffs and members of the press who were covering the story, Frank Schweihs and Alan Ackerman had given the matter their best shot – and had come up short. 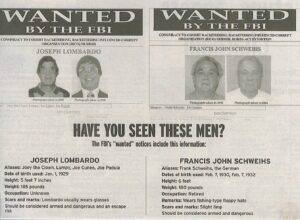 Two weeks later, at the actual sentencing, a solemn Judge Ann B. Williams read her order that Francis John Schweihs, convicted extortionist, was to spend 13 years and one month in the Federal Correctional Center at Rochester, Minnesota. Additionally, Schweihs was ordered to pay some $42,900 in fines and restitution.

Although Schweihs made a blustering statement at the end of his trial, full of bravado and macho posturing, he is regarded as a prime candidate for federal pressure to share some of his Mob insider’s secrets. Investigators believe they have a good chance to “flip” Schweihs into the federal witness protection program, in exchange for a detailed listing of what he knows. Among the unsolved crimes “The German” is believed to either have been personally involved in or at least have close knowledge of are:

The June, 1986 murders of Anthony and Michael Spilotro, whose beaten-to-death remains were found buried in an Indiana cornfield. Tony Spilotro was a major Chicago Mob figure who oversaw gambling and skimming interests in Las Vegas.

The February, 1985 murder of Charles “Chuckie” English, who was shot in the head as he was leaving an Elmwood Park restaurant. English was once a major figure in the Mob, working as a trusted lieutenant to Sam Giancana.

The January, 1983 slaying in Lincolnwood of Allen Dorfman, the Mob financial expert who ran the Teamsters Union pension fund as if it were the Mob’s personal checking account.

The December, 1973 killing of Richard Cain, a renegade cop who had at one time been a Chicago Police vice detective and then chief investigator for the Cook County Sheriff’s Department – before he was discovered to have been secretly working for Mob super boss Sam Giancana.

Also, Schweihs is believed to have personal knowledge of the murders of such prominent Mob figures as Sam Giancana, Sam DeStefano and Chuck Nicoletti.

Some of the killings that Schweihs is believed to have knowledge of go back to the 1960s, including the 1967 murder of juice-loan collector Alan Rosenberg and the 1962 murder of a young manicurist named Eugenia Pappas. Her body was found in the Chicago River with a gunshot wound to the chest. Before her death, she had been known to keep company with a reputed Mob hitman – Frank “The German” Schweihs.