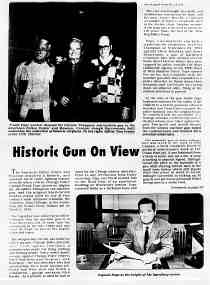 Frank Pape, a Chicago police detective who fought more than a dozen gun battles and survived without a scratch while sending nine suspects to their graves, died March 5 at his home in Park Ridge, Ill. He was 91.

In his 39 years on the force, beginning in the era of fedoras, tommy guns and gin mills, Mr. Pape won, indeed often seemed to strive for, a reputation as the toughest cop in Chicago. He fruitlessly staked out Baby Face Nelson as a new recruit, sent 300 men to prison and 5 to the electric chair and bragged that he never used his gun to fire warning shots, only to kill.

For two decades, Mr. Pape headed the department’s robbery detail, its elite unit. There were 49 articles about him in detective magazines, and his stories provided grist for the 1950’s television series ”M Squad.”

”I never started a fight in my life, but I’m not going to take any lip from a hoodlum,” he told Coronet magazine in 1949. ”I represent the city of Chicago and Chicago stopped taking orders from gangsters a long time ago.”

Though he came to feel that the police were handcuffed by judicial and political supervisors, Mr. Pape’s own actions were partly responsible for a famous judicial crackdown on freewheeling tactics by police officers. In 1958, without an arrest or search warrant, Mr. Pape entered the apartment of a suspect, prompting a legal case that reached the Supreme Court and resulted in his paying an $8,000 fine.

The effect of the case, Monroe v. Pape, was to permit the federal government to bring civil rights actions against police officers in local cases. Charles Adamson, who wrote ”The Toughest Cop in America,” a biography of Mr. Pape to be published this summer by Dilettante Press, likened the restraining effect on police to the Miranda decision, which protects suspects by requiring that officers warn them of their rights against self-incrimination when they are arrested. 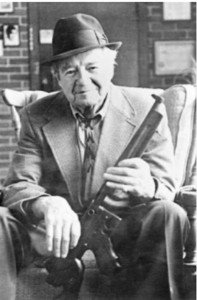 When Time reported on that case, Mr. Pape filed a $350,000 libel suit against the magazine. This case, too, went all the way to the Supreme Court, which ruled against Mr. Pape. Time had based its article on a previously published report by the United States Commission on Civil Rights and did not make it clear that the report recounted accusations of racism and abuse on Mr. Pape’s part, rather than established facts.

However, the Court eventually ruled that the misreading of an ambiguous document did not amount to the ”actual malice” necessary to prove libel of Mr. Pape, a public official. In legal terms, when a public official is involved, actual malice involves knowledge that the published information was false or in reckless disregard of the truth.

Mr. Pape was born in the Bucktown section of Chicago in 1909. His father died when he was a toddler, and he became the man of the house early in life, taking care of his mother and sister. He dropped out of high school after two years to become a sheet-metal worker.

He joined the police department in 1933, two years after Al Capone had been sentenced to prison for tax evasion.He was so slight that he stuffed himself with bananas and gallons of water to make the force’s 150-pound minimum weight.

But Chicago remained a place of larger-than-life cops and robbers. Those were the days when policeman would set a trap for a suspected police killer, cut him down in a hail of bullets and pose for newspaper pictures afterward. Mr. Pape established an identity by never carrying his gun in a holster: he kept it in his front pants pocket, which his wife had strengthened by sewing in a canvas lining.

He relied on shrewd intuition. Mr. Adamson tells of the sunny Sunday afternoon when Mr. Pape noticed a car approaching, with two men and a woman inside. ”There’s something dirty about that car,” he said, as he whipped his own car around to stop the vehicle.

The three emerged blasting, but Mr. Pape and his partner won the gun battle. It turned out that one of the men had killed a police officer. On at least two other occasions, Mr. Pape used the same maneuver, Mr. Adamson said.

John Haberkorn, a retired police commander, insisted that Mr. Pape chose his targets carefully. ”He never went after the good guys,” Mr. Haberkorn said. ”He went after the bums and hoodlums.”

In a 1994 interview with The Chicago Tribune, Mr. Pape told of spotting Jackie Cerrone, a top mobster, walking down Washington Street in the early 1960’s.

”He had on a gray herringbone coat with a velvet collar and a gray hat, very snappy,” Mr. Pape said. ”He was walking toward me, and he was with a guy who had stopped to look into a shop window. I walked up to him and said to him, ‘As long as I’m commander of this district, you’re not welcome here. And take that bum with you.’ ”

The ”bum” was another mobster, Tony (Big Tuna) Accardo. ”They both left like I told ’em to,” Mr. Pape said.

When he heard that Mr. Cerrone was plotting to kill him when he got out of prison for murder, Mr. Pape recalled, he visited him.

”I know how to stop you murderers,” he said. ”What we should do is take a shotgun and blow you guys’ heads off and leave you on your front lawns, ring the doorbell and let your families find you. That’ll stop you.”

Mr. Pape had a softer side. ”The toughest guy in Chicago sings tenor,” said a 1949 article in Coronet magazine. ”He also dresses like a college student and frets because his children read Dick Tracy.”

His son Jerry, who lives in Big Sky, Mont., said Mr. Pape found jobs for unemployed neighbors and helped buy bicycles for their children. He had a pilot’s license and would take children for airplane rides. He invited his men to big parties at his cottage in Duck Lake, Ill.

In addition to his son, he is survived by his wife, Kitty, and his daughter, Judy Clark, of Park Ridge.

Jerry Pape said his father had never fired a shot until one of his partners died in his arms. He told of being a small boy and having his father came home late at night and wake him.

”I just killed a guy, and I want you to know one thing about me,” Mr. Pape told his son. ”Everybody I shot and killed deserved it. I slept